On 7th May 2019, Karin stopped at an RTMC roadblock. Initially the RTMC agents were instructed to charge Karin with fraud and arrest her, according to traffic chief Oliphant’s order he himself issued a few years ago, now also in complete disregard of Hylton’s recent RGH case, judgement and not guilty verdict. Furthermore in breach of his own oath of office and mandate, which includes to uphold the RSA constitution act 108 of 1996, thus recognizing common law.

After Karin indicated to the RTMC agents that she is a common law traveller, she was informed by Oliphant, who was speaking through his agents, that “common law does not exist in South Africa”, which is obviously utter nonsense and a very poor strategy of defence or attack. If he would have said “common law does not exist in the Republic of South Africa”, it almost would have made sense, since RSA is desperate to eradicate anything common, customary and tribal law, before the people rediscover their almost forgotten freedom.

At this point, not only for Oliphant’s education, we insert a small compilation referencing common law within the RSA constitution act 108 of 1996 and the NRTA :

Knowing Oliphant from previous interactions, he is most likely to deny having said the above once confronted or under oath at court.

Due to the peaceful nature of the encounter the RTMC agents decided not to charge Karin with fraud, which warrants and immediate arrest, but rather charge her with the standard code violations, i.e. driving motor vehicle without licence, driving an unlicenced and unroadworthy vehicle, including a summons to visit the Knysna court on 26th June.

In the run-up to the court date Karin’s partner Lawrence, also an avid RGH member, contacted control prosecutor Engelbrecht, who showed very little interest in the matter, but said that the matter would be placed on the roll regardless.

On the day, Engelbrecht informed Karin that Hylton’s case does not constitute a precedent, nor did Jan’s case, which did not even enroll, based on the verdict in Hylton’s case and endorsed by Engelbrecht himself. Confirmation again, the RSA courts grant themselves condonation whenever they seem fit or unfit. While at the court and waiting, Karin communicated with other court personnel and it became evident once again, their main concern is the lack of revenue from RGH members and not road safety, but admittedly they are also unsure with regard to the ‘legal’ status of RGH.

Read below some excerpts on stare decisis or ‘the doctrine of precedents’, especially in connection to section 39 (2) of the bill of rights. This is the very section UZA (Unified Common Law Grand Jury of Southern Africa) cited on many occasion with regards to common, customary and tribal law, how it is totally ignored and neglected in favour of  foreign statutory roman-dutch law, merely serving as an alibi or giving people the impression, common, customary and tribal law are well and alive.

Doctrine of Precedent in South Africa

On the 16th of July, Karin arrived at the court accompanied by Lawrence and Jan, an expert witness in RGH matters. All documents on hand, RTMC witnesses present too, including their evidence, i.e. RGH number plates, safely guarded. On duty was magistrate Leonore Swartz and public prosecutor Eric. After what seemed like a long morning, Karin was called into the dock around noon. Magistrate Swartz explained that another 2 trials, both on the roll since before Karin’s case, had preference and she could not promise to entertain the matter before end of day, thus suggesting to remand the matter and postpone once again to 19th September.

Karin agreed and was quick enough to ask how she could subpoena traffic chief Vukile Oliphant into the court. Magistrate Swartz suggested to visit his office and cordially invite him to be present, should he decline, Karin would have to return to the court, issuing an official subpoena.

15 minutes later Karin, Lawrence and Jan walked into the RTMC office, asking for Oliphant, who needed to be called downstairs. Seemingly surprised he greeted the RGH contingent, much friendlier than at previous encounters though. He obviously did not accept the invitation, saying he would only act upon orders issued by a court and would need to consult his own legal department. He was very uncomfortable with the situation, lacking confidence to a point of embarrassment. He also denied to having any knowledge of Jan, who had extensive communication and exchange with Oliphant in the past year.

Again he was unable to comment on the order to arrest all RGH members issued by no other than himself, only warning them to stop “driving with those number plates”.

What is probably most disappointing, a man of his stature, a chief, hiding behind his foot soldiers, unable to be true to his own word or man enough to say “yes, thank you for coming, I shall be in court on the 19th of September“.

19th of September, the much anticipated date, ready for trial and ready to expose at least a segment of the unlawful corporate structure affecting everyone’s life these days, everyone was present, five RGH members and 4 RTMC agents, but no magistrate, apparently a court orderly was also missing for procedures to commence. Patience is key when visiting RSA courts.

Finally, Karin and RTMC agent Goeda, who issued the initial ticket and confiscated RGH property, were called into the trial court room and asked to sit down with public prosecutor Vandana Premchand, who needed to obtain some information to proceed, admittedly she had never dealt with a case similar to this and that it was all new to her. After Karin offered a brief explanation, Premchand turned to Goeda, asking her if they (RTMC, traffic services, SAPS) had investigated RGH as to find out who and what they are. Officer Goeda, RGH number plates in hand, said ‘no’, to which Premchand reacted somehow upset, understandably so, how is she supposed to prosecute something or someone for THE STATE if its agents fail to provide any information ?

Very quickly the other RTMC agents, Oliphant, Davidson, Payle and an unknown attorney, stepped in, almost surrounding Karin, trying to intimidate her or hoping to tip the scales. Lawrence, Justin and Jan intervened, introducing themselves and reminding the prosecutor that the court was not in session. What followed was a 50 minute partly heated debate and probably the best exchange between RGH and RTMC thus far, although unfortunately off the record. It seemed as if Vandana Premchand had a genuine interest in RGH, at times almost sympathetic. The RGH members put forward some of the relevant questions regarding jurisdictions, the unlawfulness of statutes, privatization of public offices, violation of oath of office and insights into the financial makeup of RSA (Pty) ltd.

It became evident that the officers had no answers, seemed embarrassed and tried to avoid most issues, saving their face and skin, although somewhere inside they know and understand why RGH exists.

It was suggested for them to read and study the contents of the RGH website. At this stage the matter was to be remanded, giving THE STATE and its agents enough time to educate themselves and be fit for a trial. RGH also suggested a truce, suspending the unlawful order to arrest RGH members, charging them with fraud until the next court visitation. This seemed all the more reasonable in light of the RTMC’s failure to even obtain any information about RGH. Premchand was unable to assist as a prosecutor in this regard, she suggested contacting the director of traffic services. Jan explained that RGH had been seeking dialogue with Kenny Africa & Co. about 2 years ago, that a date was set and confirmed, but unfortunately cancelled by Kyle Reinecke, the deputy general for transport of the Western Cape, who acts as the legal counsel for RTMC and the traffic department it seems.

RGH offered to forward Premchand all previous and copy her into future communications. In the end she openly admitted that the system is broken when approached by Jan, she was grateful having received new information and said it was enlightening.

Everyone except Karin, Premchand and one court official, left the court room, Karin was only to arrange a new date with Premchand. After what seemed like a long 10 minutes, Jan stepped back into the court room, at which moment Karin was just getting up, holding a piece of paper in her hand. Jan asked if the new date was confirmed, looking up at the same time and spotting magistrate Hendricks on the bench, and Karin informing Jan that the matter had just been struck off the roll…

Apparently Hendricks nonchalantly entered the court room after everyone had left, looked at the file and said that THE STATE had enough time to make its case but failed to do so, therefore struck off the roll, i.e. indefinitely postponed or THE STATE reserving its right to a future prosecution whenever they feel like it, the most cowardice and logical move, once again, to save their faces behind the corporate veil. If THE STATE failed to make a case, why not dismiss the matter, with prejudice ? Because it would be a victory for the people and a defeat for THE STATE.

During those 10 minutes, both Karin and Premchand, actually tried to convince Hendricks to proceed with trial, which is rather unusual since mostly everyone is happy to get out of court, never to return, everyone except the people of RGH.

Did Hendricks eavesdrop into the foregoing conversation, just behind the wall in the back of the court room ? Was he privy to some of the content ? Or if not, did he receive some intel from the RTMC agents, the prosecutor and/or any of the other court employees, who witnessed the incompetence and inability of the traffic officers, thus concluding a trial could prove disastrous and not in favour of the corporation ?

That will unfortunately remain a mystery, but after six RGH incidents involving RSA courts, silence speaks louder than words again, just like UZA vs. Constitutional Court, and for as long as the people’s questions remain unanswered, the only conclusion is, that THE STATE, the government, its corporate and private subsidiaries and the supposedly impartial judiciary are all acting in complicity as agents for the banking cartels who own and control SARB, the treasury and determine economic policies, forever increasing national debt, maintaining modern day slavery.

On 25th September 2019, Jan visited the offices of Kenny Africa (director for traffic Western Cape) and Kyle Reinecke (deputy general for transport Western Cape), only to speak to their respective assistants again, nevertheless hand delivering a document chronologically listing all RGH cases and the inability or incompetence of THE STATE’s prosecution.

Obviously, to be continued… 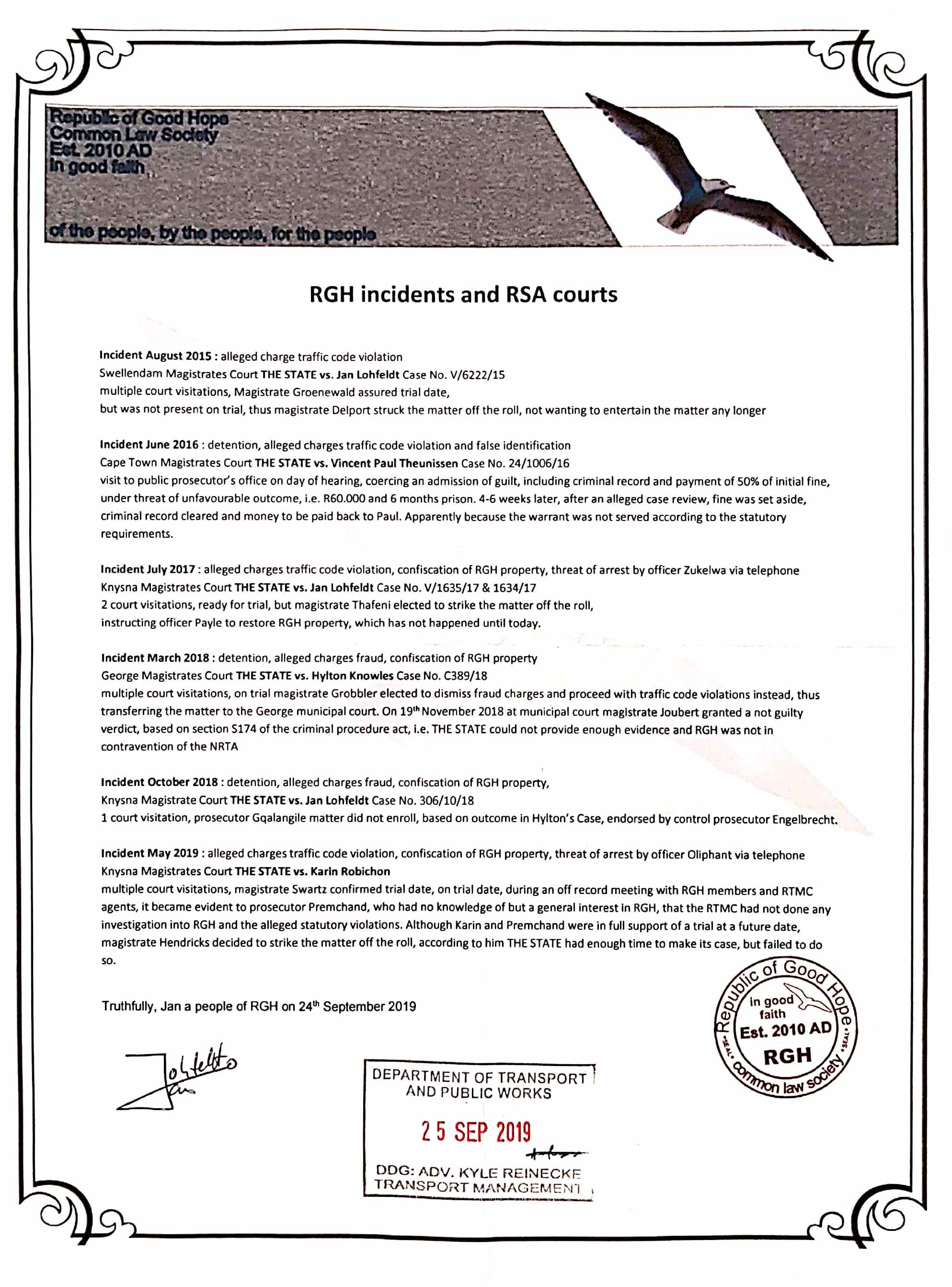 One thought on “Knysna Incident 2019” 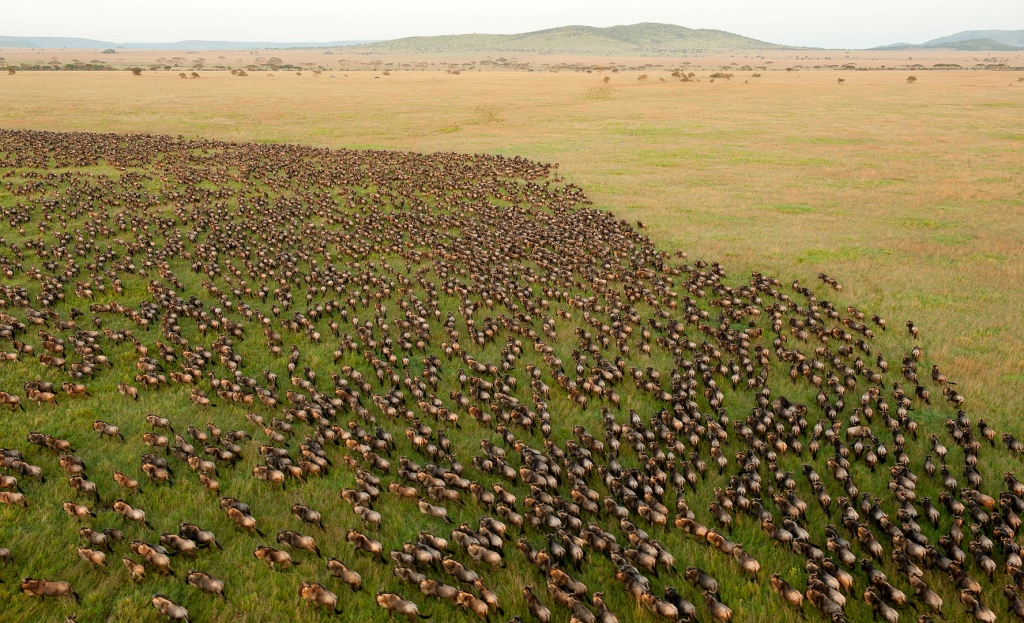