Country or Nation, Constitution and Declaration

Most people would say that we all live in a country and are members of a nation (with or without a rainbow), which essentially is not incorrect. But more importantly we all live on the land, apart from a few sea pirates and the global elite who have been trying to push the law of the sea onto the land for centuries. Land does not equal country, for the borders of a country are not fixed and names are subject to change. Land, like man, doesn’t come with a name. In its natural form it is free of labels; it is man holding it hostage or in bondage. Also, that fictitious entity called THE STATE is often confused with a country or a land, and deliberately so.

A country is a clearly defined territorial area, usually fenced off and safeguarded by force. It is nothing short of a prison or concentration camp: you cannot get in or out without permission, approval and the correct papers. A nation of people require neither legal documents to recognise or accept each other nor barbed wire fences or border patrols to force them together. If the tribe or nation maintains a healthy number of members who identify with each other, it does not require centralised, top-down organs of control and the ensuing bureaucratic mess. A sound nation lives by a set of customs and traditions, and by a simple set of laws:  do no harm, cause no loss and don’t impede the freedom of others.

Long before relatively speedy modes of travel, many tribes and even great nations were sometimes restricted to specific areas due to natural frontiers or boundaries, like rivers, oceans or mountains. Not always were relations with other nations peaceful, but lawful treaties helped keep the peace and settle disputes.

Every day we read or hear about the constitution: how it applies, how it should be amended, how it protects our rights, etc. There is nothing essentially wrong with a piece of paper setting out some guidelines for people of the same club, but when such a document tries to please millions of diverse people it is virtually impossible. Certain groups, like the World Constitution & Parliament Association, even attempted to draft a constitution for the entire planet. Not to mention the global NWO agenda to create a one world, not based on benevolent objectives at all. Further, most constitutions in history were written by men who could read and write, usually part of an elite or select few, or if not part of them, already monitored and under the watchful eye of those who have controlled governments since its very inception. Even though some constitutions may appear humanitarian, noble or in the interest of the people, they are nothing but dead (and debt) instruments, put in place to provide the common people with some perceived security, effectively harnessing their minds and harvesting their trust. Even countries like modern South Africa, its constitution often heralded as one of the most progressive constitutions in the world, when nothing could be further from the truth. Firstly, the people who formed part of the team drafting it, weren’t exactly your freedom fighters, they were handpicked and already in the pockets of the banks, bribed, paid and/or threatened. Also, the constitution, the so-called supreme law of the land, became yet another act (108 of 1996) of corporate parliament, pushing its maritime roman-dutch statutory law agenda. Later there was a somehow desperate attempt to correct this rather obvious mistake, simply drafting another act, which officially would stop act 108 being referred to as an act. Once an act, always an act, nothing real here. Further, to add insult to injury, the original bill of rights had been incorporated into the constitution act, essentially nullifying it, or as explained by ‘judge’ Dolamo in court, only effective in conjunction with all the other ca. 12000 acts of parliament. Hence, when we talk about or refer to the bill of rights, we would say “ in the spirit of the bill of rights “. Because, and that is the most important part or aspect, who does the constitution apply to or who needs to abide by it? The answer is simply anyone who has given an oath to uphold it and placed his/her autograph or thumbprint underneath it, meaning all so-called public servants. Constitutions originally weren’t about what the people are permitted to do, but rather what the government wasn’t allowed to do, or plain check and balances on those trusted people elected into positions of executive power. But what about the rest of the population, the citizenry? Well, it is simply assumed, just like everything else in law, that due to the grand mistake of our biological parents, the registration after birth into the corporate system of slavery, we become part and parcel of this society, whether we like it or not. Only a few days old and no consent required. Unable to speak for ourselves, not even aware of our geographical location. Later in our teens, after just enough time of indoctrination through the educational system and peer pressure, we happily pick an ID, usually with a not-so-happy image of ourselves, thus wrongfully identifying with a number and the legal concept of a citizen. Shortly thereafter we register to vote and partake in quasi democratic elections, our snippet of free will and choice. At no time have we ever been presented with a copy of any constitution, to sign and approve of it. Something that could easily be done during elections, when millions of dollars or rands are spent to send out merchandise and other propaganda material. The answer is obvious, if a constitution was presented for acceptance when placing an ‘X’ on the ballot paper, what would be the consequences if one didn’t agree to or approve it ? If there was no binding contractual agreement based on consent and transparency between you and the state ? Is there still an obligation to abide to it ? To avoid such situation, which could potentially and very quickly escalate, citizens and residents are made to believe, that simply by living in a certain state, just by physically being on the ground, the laws automatically apply to them, since most of them are legally registered and carry an ID tag, confirmation of obedience and voluntary servitude after all, so why question anything ?

Next time you hear about or even insist on your constitutional rights, think twice, do they provide you with some protection in the form of rights or is it a mechanism to confirm your ‘ward of state’ identity, thus subjecting yourself to the fraudulent jurisdiction of the state?

With regards to RGH or any other nation, club or group of people, how important is a constitution? Does it form part of the legal requirements imposed by some international standards ? Because of the ingrained conditioning, it is one of the first things people get excited about when starting a new association or nation, thus merely replicating the system they are trying to break away from. Attempting to constrict 3D ever changing organic life to 2 dimensional paper, static and statutory, limiting. This is what all the thousands of acts, statutes, by-laws, regulations and constitutions are trying to achieve, writing down every single possibility, probability and improbability in life, anything that could or could not happen. The mechanic fantasy of the human mind. In case of any violation, simply be able to draw the relevant act and its prescribed punitive measure. No lengthy trial or oral testimony required.

Comes now, after we the people have discovered and digested all of the above and its implications as well as limitations, the declaration. It is something we need to learn again, what it means and why it is necessary. It is about status and standing, in truth and with honour. In light (or darkness) of the current situation on earth, there was never a better time to make declarations. It might seem like an old-fashioned thing to do, something our forefathers have done, but then, history does repeat itself. What has changed and what stops people from doing so is the fear a heavily militarized police force in many parts of the world, who, in their lobotomized state and fear of losing their jobs, will carry out any and all orders received from their superiors. Sure rebels back in the 18th century didn’t have an easy life either, but there was no global apparatus of surveillance or police on every corner. Our advantage today is our strength in numbers. If only a few thousand at a time make declarations, declare their own territories and societies, recognizing each other and issuing their own documents, Babylon would fall again, withdrawing your consent, energy, money, love and fear for the system.

Your tribe, association or group defines who you are and how you are going to regulate yourselves based on the one law of “do no harm” and the four fundamental ethical principles :

The Principle of Respect for Autonomy

The Principle of Beneficence

The Principle of Nonmaleficence

The Principle of Justice 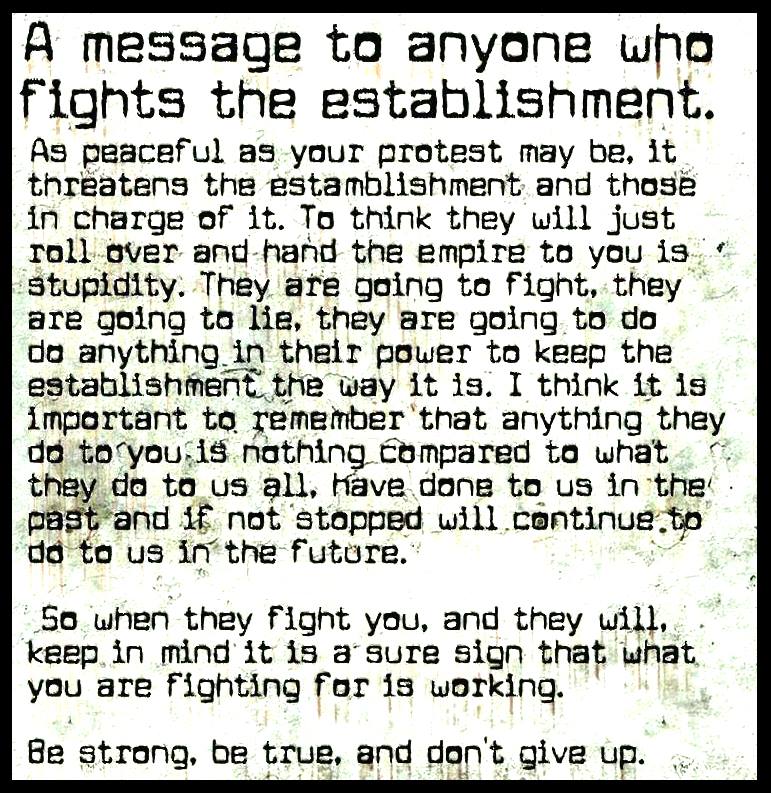