Removing a legal name from the voters’ roll is the very first step and activity in reclaiming your sovereignty and independence from any corporate state. It initiates your path into freedom and at the same time informs the control mechanism about your departure, i.e. you are no longer supporting the political charade, its orchestrated circus or bipartisan deception.

It is an empowering step, because you have to do it yourself, become active and vacate the safe space behind your screen. It is also a relatively easy first step before rescinding citizenship, making declarations or travel with private number plates or passports.

In most countries around the world, people become eligible to vote either by being birthed into a certain territory and/or assuming its citizenship shortly after birth due to the unlawful conversion and registration into the matrix control system. In some countries people have to register before participating in any of the rigged elections, like the South African government runs a number of voter registration weekends to lure its flock into the land of false promises and benefits.

What is important to comprehend, even if you elect not to cast your vote or visit the ballots, calling yourself a non-voter, because you have seen through the non-sense and no longer actively support politics, you are still approving of the status quo, your non-voting activity will be acknowledged in the voter turnout and statistics.

Only people who no longer feature on the voters’ roll have an actual reason to complain about politics and elections, simply because their spectrum or opinion is not recognized in any way. Unfortunately the opposite is the case, people who don’t vote (registered of not), are subject to serious criticism, sometimes also accused of indirectly supporting right wing extremists due to their abstinence or apathy.  When the voter turnout is 70% (of registered voters), 30% of all seats in parliament should remain vacant. And if 20% of the population are not even registered, then the percentage of vacant seats could be higher than those occupied. But the voting population is treated as the 100%, deciding on their trusted representatives and subsequently the fate of the entire nation.

If you have arrived here, you probably have a general understanding of the LEGAL NAME, the straw man, legal fiction or what a PERSON and/or CITIZEN is, whose name appears on the voters’ roll, not your given and family name. If this is the first time you hear about these, then it’s a great entry point into the realm of corporate states, its origin and purpose, tacit consent or acquiescence.

As much as we would like to provide a bulk de-registration process, informing RSA (Pty) ltd weekly on potentially hundreds or thousands of people removing themselves from a false democracy aka mob rule, it is up to every man and woman to complete these steps individually. Once done, and possibly in possession of a receipt or confirmation, we can publicize your departure and act of state denialism here.

You can also check on your registration status on the IEC website itself or via SMS.

De-registering from the voters’ roll is also a prerequisite upon joining RGH as a member.

A few years ago the IEC website stated the following : 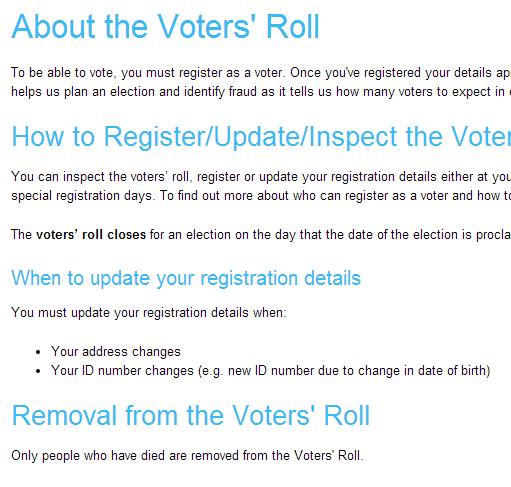 On visiting the IEC website in 2021, the above seems changed or removed, including the entire section for de-registration and the form REC6 required for the process. The website does provide a link to the Electoral Act 73 of 1998, which contains instructions on how to get off the voters’ roll. (see page 192, section 180, appendix 6, regulation 4) :

10 Applications for deregistration as voter

4 Application for deregistration as voter 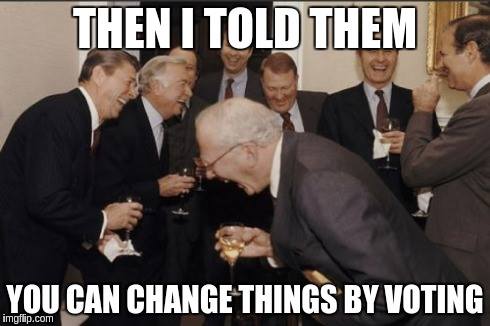